Actors and actresses aren't always the only stars in movies. Props, wardrobes and soundtracks have been known to eat up the big screen and influence the way we dress, style our hair, what we listen to, what we drive, and even the way we decorate our homes. Some films have also managed to place cocktails, mixed drinks, and other alcoholic beverages in the spotlight. From The Big Lebowski's White Russian to James Bond’s martini, let’s take a look at seven famous beverages that have stole the show on the silver screen.

The Black Russian cocktail first appeared in 1949 and quickly became popular. In 1965, it became a White Russian when someone decided to add cream. Neither drink is Russian in origin, but both are so named due to vodka being the primary ingredient.


Pour coffee liqueur and vodka into an Old Fashioned glass filled with ice. Float fresh cream on top and stir slowly. If you really want to imbibe like the Dude, just dump some vodka and Kahlua in a glass with a handful of ice cubes and then top with powdered coffee creamer. 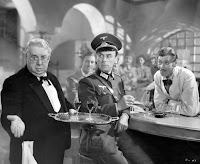 The French 75 was created by British soldiers stationed in France during the First World War when they put together ingredients they had at their disposal – London gin from home and the local champagne. Viola, they came up with a punchy little drink. It was named after a French 75mm artillery gun.

The funny thing about this drink is that it would have probably died off and gone the way of the Last Word or Death in the Afternoon cocktails. That is, until the film Casablanca was released in November, 1942. Primarily set in a bar called Rick's Café Américain, the characters in the film were constantly drinking. However, no drinks are as interesting as the French 75s ordered by Yvonne and her Nazi boyfriend.

Shake with ice, except the champagne, in a chilled cocktail shaker. Pour into a Collins glass half full of ice and top off with champagne.

1988's Cocktail is the most iconic bar movie of the '80s. The red eye cocktail probably existed before the movie, but we don't know that anyone was using this variation to cure hangovers until this movie. We also doubt if anyone actually drinks this today. It is, however fun to list because it is so fucking stupid.

Pour all the shit together and drink it. 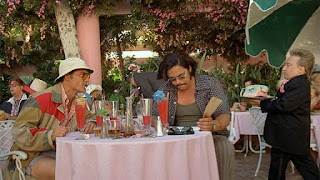 The Singapore Sling is a Gin-based version of the Hurricane, Planters Punch or any number of fruity Rum drinks. It is believed to have been developed sometime before 1915 by Ngiam Tong Boon, a Hainanese bartender working at the Long Bar in Raffles Hotel, Singapore.
Hunter S. Thompson revived the long forgotten cocktail in the 1998 film Fear and Loathing in Las Vegas. In a flashback, Raoul Duke recalls "sitting in the Pogo Lounge of the Beverly Hills Hotel... in the patio section, of course, drinking Singapore Slings with mezcal on the side."

Combine in a tall glass: gin, cherry brandy, pineapple juice and lime juice. Add ice, stir, and top off with seltzer. Float sloe gin and grenadine over the top, and garnish with lime wheel perched on the rim. 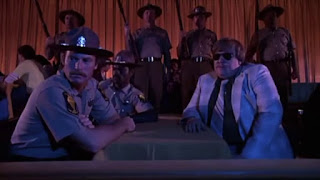 The 1980 Blues Brothers film is nothing short of iconic - completely quotable and one of those movies you can watch over and over again without ever getting tired of it.
In the film, Jake's parole officer, Detective Burton Mercer (John Candy), attends the film's climactic concert in order to arrest Jake and Elwood. However, Mercer decides he wants to see them perform first and orders drinks for himself and two state troopers. Who even knew it was a cocktail before Candy's hilariously delivered line, "Who wants an Orange Whip?" Then, pointing to each of the troopers as he orders from a cocktail waitress, “Orange Whip? Orange Whip? Three Orange Whips.”  It’s a festive combination of rum, vodka, orange juice, and cream which makes the perfect punchline when ordering from a waitress while already shitfaced.

Fill cocktail shaker with ice; add all ingredients except Orange slice. Shake well until frothy; strain into an ice-filled Collins glass. Garnish with an orange slice.

Sidecar (Bonfire of the Vanities)

Although the Ritz Hotel in Paris claims to have invented the drink, the exact origin of the sidecar is not clear. What is known is that it started showing up in cocktail guides shortly after World War I and was directly named after the motorcycle attachment.

This was another one of those drinks that was on its way to extinction when it was saved by a movie. In 1990’s Bonfire of the Vanities, Arthur, an old man and the husband of gold-digging southern belle Maria Ruskin (Melanie Griffith), orders a Sidecar with Courvoisier VSOP. Due to poor health, he’s not supposed to be drinking, but since his wife is in Italy she won’t know. The drink is so delicious, Arthur is willing to risk death.

Wet the rim of a cocktail glass and dip it in the sugar. Combine the first three ingredients with ice in a shaker. Pour everything into a martini glass and garnish with lemon. 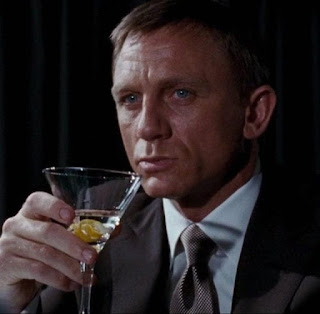 Ian Flemming's James Bond is famous for drinking martinis, shaken, not stirred. But it wasn't until 2006's Casino Royale that Daniel Craig brought back the Vesper martini.
A classic combination of gin, vodka, and white wine (or, Lillet Blanc if you want to be really classic).

Add gin, vodka and wine into a mixing glass with ice and stir. Strain into a chilled cocktail glass. Twist a slice of lemon peel over the drink, rub along the rim of the glass, and drop it in.