Dive Bars and You: A guide to getting the most out of your drinking experience 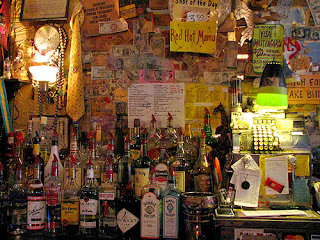 Since the late 1970s and early 80s, theme bars with catchy gimmicks started showing up all over the US and Canada.  Discos trying to emulate ’s Studio 54 or 2001 Odyssey, the dance club from Saturday Night Fever, seemed to show up in every major metropolitan area of .  Then, there were the cowboy bars modeled after Gilley’s from the film Urban Cowboy, the “fern bars,” complete with over-stuffed sofas, live plants and real paintings hanging on the walls, and even bars built as knock-offs of the bar from the television show Cheers.  A few years ago, Retro-themed bars became the hot ticket.  After a fifty-year hiatus from being cool, Tiki lounges and bowling alley bars fell back into favor with the drinking public.  Today, we can find nightclubs with bars made of ice, rooftop nightclubs, and bars inspired by NASCAR, log cabins, ships, and the NBA.

Recently, the lowbrow trend of young urban hipsters drinking Pabst Blue Ribbon and Lucky Lager has given way to the Dive Bar-themed bar.  Yep.  It's like a dentist who buys a Harley and dresses up in leathers and rides around on the weekends.  It’s fun to pretend, but it’s not the real thing   Apparently, the young Pabst-swilling posers think that drinking shitty beer is cool, but they’re not quite adventurous enough to spend time in a real dive bar.  So they spend time in a fake one. You know, to look cool.

Generally, real dive bars meet the same criteria.  They aren’t part of a corporate chain or franchise, they primarily serve domestic beer, drinks are cheep, there's no dress code, there's a TV with the volume set on mute, and the employees don't wear uniforms.  They’re dark, have no windows, and most of the furniture is pretty beat up.  It’s also rare to find one which accepts credit cards, but common to find one with an ATM machine located somewhere inside. Other criteria may include some sort of jukebox, video games located somewhere in or on bar, at least one employee with a mullet, cheap local beer specific to region ( i.e. Lone Star, Iron City, PBR), a pool table, at least one female (or male) undergarment hanging behind the bar or from the ceiling; and some form of taxidermy mounted proudly on the wall.

So, if you are ready to experience a real dive bar, here are some guidelines which will enhance your experience: