A Toast to Prohibition

Since the pilgrims landed on Plymouth Rock, alcohol has been an important part of American life. But in the mid-1800s evangelical Protestant churches, especially the Methodists, Baptists and Presbyterians started sponsoring the Temperance Movement.  By using pressure politics on legislators, the anti-booze folks achieved the goal of nationwide prohibition in 1919, emphasizing the need to destroy the political corruption of the saloons, the political power of the German-based brewing industry, and the need to reduce domestic violence in the home.

All of this was, of course, a bunch of bullshit.

Without liquor, there was no reduction in domestic violence and political corruption actually grew. Prohibition also opened the door for bootleggers and mobsters to become very rich.

But the most disturbing thing was that the Temperance Movement was actually started by a bunch of women who nagged long enough and loud enough until they finally got their way. They decided that, in the name of religion, they would eradicate liquor. It didn't matter that booze was part of what made free. 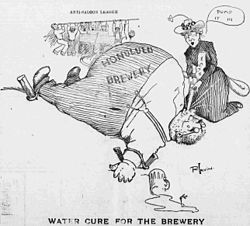 It's a fact that the Puritans loaded more beer than water onto the Mayflower before they cast off for the and there wasn't any cranberry sauce, mashed potatoes, sweet potatoes, or pumpkin pie at the first Thanksgiving, but there was beer, brandy, gin, and wine.  It's also a fact that the very first construction project at Harvard was a brewery so that a steady supply of beer could be served in the student dining halls. And it's another fact that the first whiskey was made in 1789 by a Baptist minister. Even Abraham Lincoln held a liquor license and operated several taverns.

These bitchy women wanted their way and eventually achieved their goal of making the majority of Americans believe that to let booze pass their lips is to sin.

In the end, Prohibition didn't work. It was a fucking failure of giant proportions and was repealed via the Twenty-first Amendment to the United States Constitution eighty-five years ago, on December 5, 1933.

The worst thing about it was that even after Prohibition, the moral stigma attached to liquor consumption stuck. Even to this day, most conventional Protestant groups are against drinking. But there were two very cool things that happened because of Prohibition: 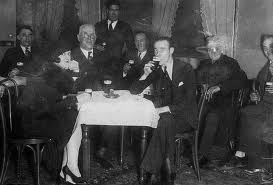 Generally, before Prohibition, saloons were reserved for men, where they drank beer and whisky.  During Prohibition, it became very hip to drink. It was a badge of honor to actually know how to gain access to a speakeasies. So, more and more women actually began to drink.

Moonshine, Bathtub Gin and other compact spirits were so terrible that bartenders started inventing ways to make it tolerable. They began to used fruit juices, soda pop and a variety of other mixers. Thus, the modern cocktail was born.

So here we are. Seventy-nine years after the death of the worst, and best, thing to happen to American drinkers.  Raise your glasses and drink to Prohibition. Drink because it ended; drink because it happened; and, mostly, drink because you can.